Not Embracing the Tin Man 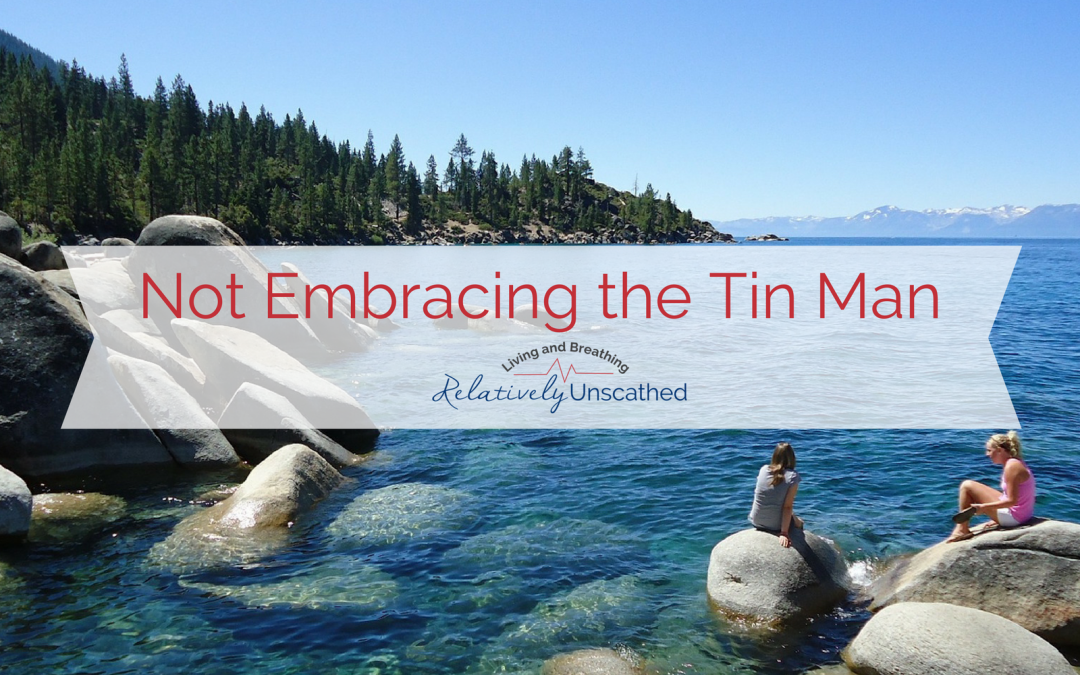 Well, it has been a while since my last post. I spent much of that time recovering from my knee surgery, visiting with my aunt and mom, making a trip to see my brother and his family, and generally trying to take care of business. My husband has been working much longer hours due to a job change and with all three of the kids still home for the summer, it is sometimes hard to find the time (or energy) to sit down for a post. Also, there was a week there where my computer was being repaired by Apple. I know some folks do their blogs via their phone, but that’s not going to happen in my world.

So here’s the latest. My pain continued and even started to get worse as time went on. I had always said that eventually I would try out an elimination diet to see if any food makes a difference for me, but figured I’d at least wait until school started. But I have had a great deal of trouble sleeping through the night, and I’m now taking a cocktail of pills to make it through (much more than ever before). One night I was in tears from the sheer desperation. I felt at my inability to control the pain, and the following day one of our beloved members of our online ASS group passed away after a ten-year battle with my disease….….I was totally unprepared, and I started the diet. I realized that there was no time like the present, and I have an upcoming Rheumatology appointment at UCSF on September 11th, and I wanted to be able to go there with some answers because now I’m suspecting my pain is more than just arthritis.

Polymyositis. It isn’t a word I’ve used much throughout this last ten months, but it is something that I’ve always known that I have. When my pain first started, I self diagnosed as having carpal tunnel in both hands/arms. As I got worse, and realized that it was worse in my left arm (I’m right handed), I came to realize that it wasn’t that. I had always assumed that 100% of my pain came from arthritis. I started all this with elevated labs suggesting that I had inflammation in my muscles. Just as with my lungs, that inflammation can eventually cause permanent damage. I thought I was asymptomatic. What I think now is that much of the pain I suffered was actually the myositis, not arthritis.

I kinda feel like I’m back in the beginning stages attempting to research and figure everything out and of course, it is still hard, because polymyositis is rare, and there isn’t a lot of info. What I’m finding is much of the info doesn’t always correspond to what I hear from actual sufferers of myositis. Most places online will tell you that it only happens in the big muscles (not places like where much of my pain is, in my forearms and hands). Thankfully, a friend was kind enough to pass along her MRI results of her forearm showing myositis just in case the docs express their disbelief that it could happen there.

Other things have been happening, too, that have worried me. I find it difficult to sit down sometimes. I’ve caught myself using the railing to pull myself up the stairs. I find it painful to walk down stairs–especially in the morning. I can’t look up for more than a few seconds, and if I look too far up, my head flops back like a little baby.

However, my labs so far are looking good. We’ll see what the next ones say, and I’m not sure what the next steps would be (maybe an MRI) or even what the additional treatment options would be. I know that Prednisone would be one of them. I am not sure if other options would be better or worse than getting back on Prednisone. I also don’t know if this is active inflammation, or maybe now that I’m not on the Prednisone and my breathing is better, I’m just taking notice of the permanent damage that was done prior to ever being medicated.

The good news is that I have found some relief during the day with the pain since I started the diet. However, I also started my amped up exercise program again around the same time. I’ve learned that exercise can really reduce inflammation, as well, which makes sense as to why my lungs felt so much better when I did it. So at this point, I’m not sure if my daytime improvements are due to food changes or exercise. I’m leaning toward exercise at this point, but I’m still a week and a half away from even reintroducing the eliminated food groups. But it seems to me the minute I stop moving I seize up like the Tin Man. Even if I just lie down to watch TV for an hour or so at night, trying to get up and walk is a laborious, painful chore. Getting through the night has been challenging, and I really don’t like taking all these pills, but I don’t know what else to do. Getting out of bed and getting everything going in the morning is hard and once going, I feel like I just have to keep going.

I’m hoping within the next month or so, I’ll have some more answers on this new front. The good news is that my lungs are still cooperating. So at the very least, my main drug is working for my lungs just fine without Prednisone. The kids are starting school in another week and a half (Yes, we are the latest in the nation.) I am looking forward to seeing what that new schedule will look/feel like.