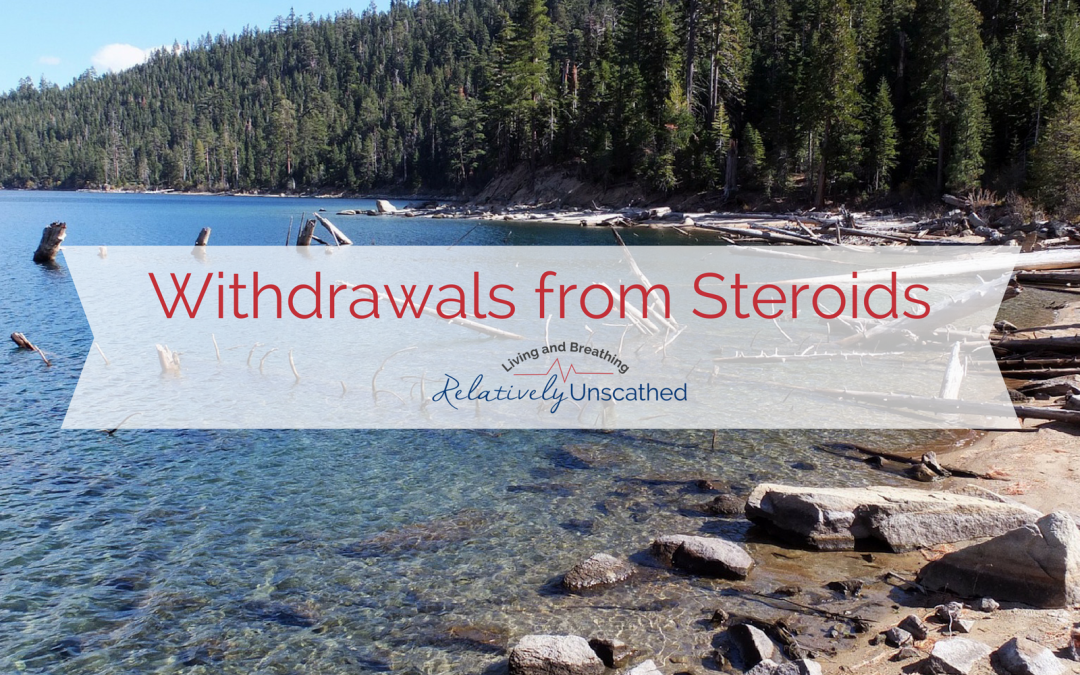 It’s been awhile since my last post. I’ve been spending my time split between dealing with the withdrawal symptoms of Prednisone to making the most of my time before I have to taper again and start the withdrawal process all over again.

Although most of my vocal complaints about Prednisone are my pregnant belly, my hump neck, my moon face, and generally being stuck at about 10 lbs more than I’d prefer,Prednisone causes many more serious issues than that. I’d just gotten new prescription glasses in December. A few short months later, I was looking at the blurred words on the TV and wondered where I’d put my glasses down only to find they were on my face. Prednisone changed my vision that much. I felt then that if it could ruin my eyes that fast, there was no telling what it was doing to other parts of my body, and I felt a renewed sense of urgency to get off the stuff.

I decided to start going down by 5 mgs instead of 2.5 each week. I figured I’d be able to figure out if my body couldn’t handle it, and I could always add back the amount I needed to level off. I also started doing my tapers on the day I had my assistant here two days in a row, rather on a Sunday, which was ruining one of the few days my husband had time at home.

The withdrawals kinda feel like I’m very run down and have a fever (although more often than not, my temperature is actually running low at 96 degrees). I’m a little shaky, but more like a speedy kinda of shaky – not a movie-scene heroin-withdrawal kinda shaky. My breathing is more difficult. I’m typically not able to think very clearly at all; small tasks that require brain power seem impossible; my mind physically feels all jumbled up. I’m an emotional wreck, and there is usually at least one part of the day spent sobbing in the shower.

Despite all of the above – I go workout. I walk as much as I can. I eat healthy. I rest, but not too long. I do not wallow. I get whatever I’m able to do, done. I still pick up my son from preschool. I still ask my daughter how her day went. I still snuggle with my baby. The shower is not just for sobs. It helps to relax me, makes my lungs feel better.

The typical routine is that most of the day really, really sucks with all of the above….and then somehow. (Maybe my adrenal glands kick in.) By evening I’m feeling much, much better. At first I would have one really awful day, day two would be not quite as awful and then back to normal by day three. When I went from 20 mgs down to 15 mgs – I had three awful days; that always gave me a break in the evening. I was under the assumption that going from 15 to 10 would be even worse, but I just did that on Thursday, and I had a less-than-completely awful day and day two was relatively normal.

Most people assume that getting off of Prednisone will make me feel better. They usually have a face of disappointment when I tell them that, no, actually, I feel worse now that my dosage is down, that Prednisone can do some amazing things like allow me to breath easier, have more energy, feel no joint pain. But sometimes you have to give up some comforts in life for the greater good. Everyone has to make choices like that – and this is one of those…the lesser of two evils.

When the withdrawals aren’t dominating my life,I’ve been really enjoying our beautiful warm weather. I’ve been taking the kids to discovery museums, various playgrounds, the lake, indoor rock climbing, etc. I think one thing the tapering has been reminding me is that I never know when I might actually be feeling like a sick person – so when I’m not, then I need to get busy enjoying life!